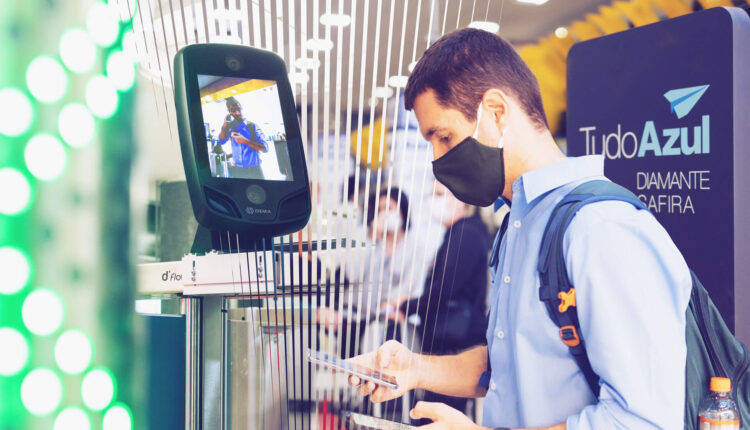 The test of the 100 % digital boarding system of the + Safe boarding program, which uses the Brazilian government’s facial recognition, began this week. The program was created by the Brazilian Ministry of Infrastructure (MInfra) and developed by Serpro, a technology company of the Federal Government, with the aim of making the boarding process at air terminals safer.

The first air route to use this technology was executed with volunteer passengers from Azul Linhas Aéreas, on a trip from Congonhas Airport to Santos Dumont. For the first time in the world the passengers of the air bridge service between the capitals of São Paulo and Rio de Janeiro participated in the simultaneous end-to-end testing of this technology without the need to present the boarding pass or identity document.

The test begins at check-in, when the passenger receives a message requesting authorization on their cell phone to take a picture. Subsequently, and after issuing consent, the official proceeds to biometric validation comparing data and photography with government bases in an absolutely digital process.

Next, the verification phase is passed, then the passenger enters the departure lounge and subsequently the aircraft, going through biometric control points through cameras, without the need to present physical documentation or the boarding pass.

According to the statements of the president of Infraero, Paes de Barros, + Safe boarding program in the air bridge “brings together two fundamental aspects to streamline boarding processes, which are safety and ease for passengers and the entire civil aviation system”.

With the implementation of this system, Brazil is at the forefront of the digital transformation that combines biometric validation with data analysis, guaranteeing a precise, agile and secure result of the passenger’s identity.

Acer should have to pay $50 million after suffering a…