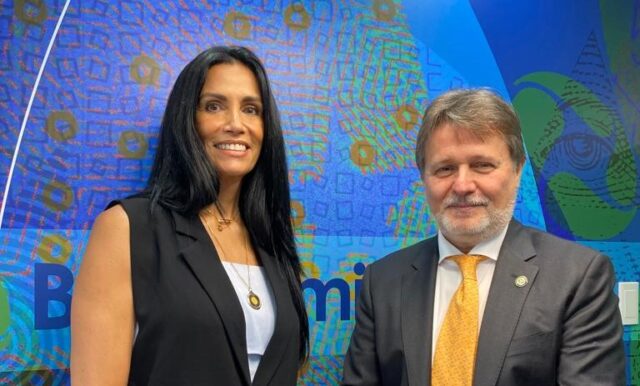 Bancamiga opened a Business Center, whose space in the Chacao agency was intervened by the artist María Fernanda Lairet, under a concept she called Global Narratives, where in a 16-meter work she plays with paper money and the Bancamiga and Mastercard brands

In order to strengthen alliances, increase value chains and provide growth in business volume to the financial institution, with a direct focus on companies, Bancamiga opened its Centro de Negocios this Tuesday at the Chacao agency.

The executive president, Ariel José Martínez, pointed out that Bancamiga opened its Business Center in the space located on the first floor of these headquarters, which will allow the growth of the bank, one of the main institutions in the financial system, to be promoted.

“This is an arm of the bank to further project its image and services. With the Bancamiga Business Center we seek to link even more with medium and large companies, corporate and transnational clients. We are well aligned to start diversifying the composition of the portfolio, with high-profile alliances. And in that the specialization of banking is key”.

In the Bancamiga Business Center, customers will have service, proposals and products according to their needs and expectations. There will be greater segmentation of customers.

Ariel José Martínez referred to the importance of diversification and specialization, which is why it is essential to have, as is our case, a human team and preparation directed “towards the high segments, so that they know our portfolio and see Bancamiga as a bank that can offer what a large company needs.”

The presence of the Bancamiga Business Center will gradually extend inland. It already has personnel in Valencia, Puerto La Cruz and in the newly opened El Tigre agency, in Anzoátegui state, it was explained.

One of the attractions of the Bancamiga Business Center is that it has made it possible to unite art with finance, led by the visual artist and photographer María Fernanda Lairet, under a concept she called Global Narratives.

In the 16-meter work, he used a continuous dialogue where he integrated the five offices on the floor. He made subjective compositions on unreal spaces with the circles of Mastercard and played with the Bancamiga logo “uniting the energy and identity of the color palettes of both entities”.

“It also integrated paper money and presented a dialogue of different pieces. There are the bolívar and the stars of the Venezuelan flag, the dollar, the plot of the euros and the Swiss francs, which have a spectacular design and balances. In the work it seems that the logo flies and is integrated at the end with the Mastercard circles, creating a beautiful block. There is a virtual line that goes through the entire composition.”

The intervention of the Bancamiga Business Center, which was carried out in partnership with Mastercard, is one of the most important works in Lairet’s career, with more than 30 years in the world of the arts, where he has exhibited at the International Biennial of Miami, Museum of Contemporary Art of Caracas, Shanghai Latin-American Art Pavilion & The International Wing, Miami Dade College and at the Marietta Cobb Museum of Art, among others.

The process of creating Global Narratives for Bancamiga began in December and was finalized in March. In the period eight projects were presented, “and one night I managed to find perfection. I am a night owl and night after night the ideas appeared and fit together. Everything was wonderful,” he shared.

“I am happy to do this work,” said the artist, who has also intervened in the Silicon Valley airport in Denver (Colorado) and was the leader in planning an intervention with a mural, as part of the celebration of International Women’s Day. Peace, in Las Mercedes, Caracas.

Father Gerardino Barracchini, episcopal vicar for the cause of Saints and current vice postulator for the canonization of Blessed Dr. José Gregorio Hernández, was in charge of blessing the new spaces and offered heartfelt words of prayer and reflection to all those present.

WhatsApp will place limits on children