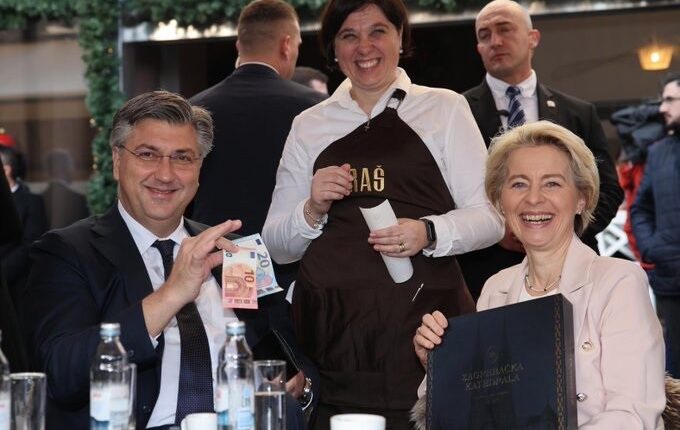 The President of the European Commission, Ursula von der Leyen, applauded this Sunday "the immense achievements" that Croatia's incorporation into the eurozone and the Schengen area have entailed

Croatia welcomes 2023 with the adoption of the euro as its currency and with its incorporation into the Schengen area, an important milestone for this country that joined the European Union a decade ago.

With the change from the kuna, hitherto the national currency, to the euro, Croatia becomes the 20th state to share a common currency. The last country to join the euro was Lithuania, in 2015.

Croatia had to comply with a series of fiscal and economic governance rules to adopt the single currency. The exchange rate will be 7.5345 kunas per euro, and the exchange will be free until the end of 2023 in all banks in the country.

Although the euro comes into force as the official currency this Sunday, January 1st, Croats will have a transition period that will last until January 14, in which they will be able to pay with both currencies.

Under the treaties of the European Union (EU), all member states, with the exception of Denmark, are obliged to join the euro as soon as they meet the requirements, but some, such as Sweden, Poland or Hungary, have not expressed the political will to do so. .

First enlargement of the Schengen zone since 2011

Both the currency exchange and its inclusion in the Schengen area could mean a tourist ‘boom’ for Croatia, which attracts tourists for its beaches along the Adriatic coast and for the medieval city of Dubrovnik.

The removal of controls at the borders with Slovenia and Hungary and for ferries to Italy will also facilitate the arrival of tourists and business travelers. However, people who arrive in the country by plane will not benefit from the advantages of the Schengen area until March 26.

The country’s statistics show that, between January and November, Croatia received 16 million foreign visitors, close to the 17.3 million it received in its record year, 2019, before the pandemic.

The adoption of the euro comes at a difficult time, with the war in Ukraine, rising energy costs, supply chain problems and skyrocketing inflation across Europe.

Croatia’s inflation rate stood at 13.5 % in November, above the EU average of 10.1 %. The EU Trade Commissioner, Valdis Dombrovskis, based on previous experience, expects a price increase of between 0.1 % and 0.3 % after the entry into circulation of the euro.

In the medium term, however, this situation is expected to be offset by lower currency conversion costs and lower interest rates. Forecasts estimate that Croatian inflation will fall to 5.7 % in 2023.

For their part, the Croats believe that traders round up when converting prices. The April Eurobarometer showed that 55 % of citizens were in favor of the euro, while 42 % were against it.

Croats have lived for decades with a dual currency system. Since many Croats moved to Western Europe, often to Germany, for work in the 1970s, and with the massive arrival of tourists, it became normal to pay in German marks, and later in euros, for homes, cars and other expensive goods.

CES 2023 will have a fully face-to-face format

Sony Xperia with six cameras will arrive in 2020

Argentine professionals to develop their own metaverse