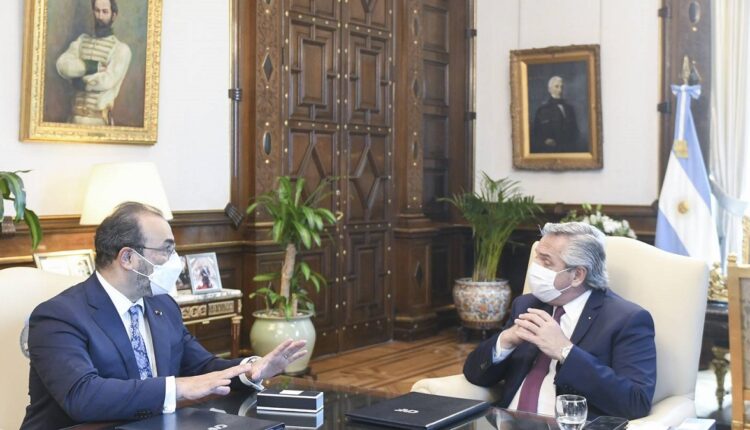 The Argentine government and CAF signed a loan in the order of 2,670 million dollars for social and infrastructure initiatives

At a meeting held in the Casa Rosada, Alberto Fernández, President of Argentina, and Sergio Díaz-Granados, Executive President of the Development Bank of Latin America (CAF) agreed on financing in the order of 2,670 million dollars for the development of social, technological and infrastructure projects.

The information was provided by Government House personnel, detailing that during the meeting the rulers analyzed “eight credits for more than 1,100 million dollars” that were signed on October 13.

According to government information, 300 million dollars will be allocated to the project to support the Argentine National Plan against Hunger “ALIMENTAR II”. More than 243 million dollars will be used to develop and manufacture the “ARSAT – SG1 satellite“, while 225 million will be allocated to the renovation of the “M” branch of the Belgrano railway.

The rest of the budget will allow to leverage a program to support the Strategic Plan for vaccination against COVID-19, financing for school infrastructure and modernization of the air traffic surveillance system.

The presidential information highlights that they also agreed a new financing for 570 million dollars for these last months of 2021 and an additional 1,000 million dollars in 2022 that will promote the integral development of the country.

For his part, the president of the CAF, Díaz-Granado, thanked the Argentine Government for the “approach it has given to the use of this multilateral bank”, highlighting that the organization seeks to work “hand in hand with science and technology, focused on people.”

IDB will hold its 2022 annual meeting in Uruguay

President of Belarus requested to mine cryptocurrencies