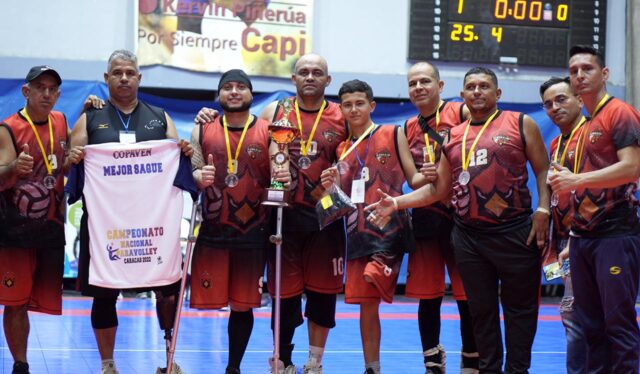 Bravos de Lara was titled in the National Paravolley Championship

After the consistent triumph of the Venezuelan delegation at the Tokyo Paralympic Games in which the participating athletes from different disciplines won seven medals, this time it was held at the “Gastón Portillo” Gymnasium of the National Sports Institute (IND) in Montalbán, from 23 to September 25, the “National Championship of Paravolley Clubs Caracas 2022”, organized by the Venezuelan Paralympic Committee. This championship had the participation of 8 clubs (Titanes, from Dtto. Capital; Cyclones, from Miranda; Azulejos, from Aragua; Aviadores, from Aragua; Fénix, from Lara; Bravos, from Lara; Llaneros, from Guárico; and Delfines, from Zulia).

Around 100 athletes from the Paralympic movement gathered with great dedication in the development of the championship, being classified in the semifinals the Fénix de Lara, Llaneros de Guárico, Aviadores de Aragua and Bravos de Lara teams. This is how the final results were reached, the Bravos de Lara team was titled Champion, and Aviadores de Aragua as Sub-Champion; Llaneros de Guárico ranked 3rd. place.

Professor Inés María Solórzano, president of the Venezuelan Paralympic Committee, and its vice president, William José Ruiz, took care of the details and guaranteed the success of the sports competition

From the Venezuelan Paralympic Committee, the commendable shared effort was recorded, which meant different supports of great importance. “We want to give a special thanks to Prof. Yonathan Rojas who was in charge of coordinating all the statistical results. To the Venezuelan Volleyball Federation that provided us with the ‘Gastón Portillo’ Gymnasium facilities. To our collaborators and sponsors: Inversiones Goa, who kindly provided the players with hydration and snacks; Javier Ceballos who contributed the significant awarding of medals and trophies, as well as nutritional supplies; MasQueDigital and MasQueSeguridad, who supported all the logistics of the event; to Fundasitio that collaborated with the setting and sound, Fundación Machile Sport that participated in the statistics, with the girls collecting balls, animation, interviews, marketing and promotion of the event, to New Arrival, that supported the endowment of each one of the athletes. Also, to Prof. Eli Saul Chuecos, president of the Minor Volleyball League, to the Olympic beach volleyball athlete Jose “Tigrito” Gómez and to Prof. Junior Chourio, who accompanied us in the logistics and awarding of our athletes, to motivate them and encourage them to continue progressing in the development of this beautiful sports discipline”.

Sitting volleyball, also known as adapted volleyball, Paralympic volleyball, Paravolley or Sitting Volley, is a sports discipline born in the Netherlands in the 1950s, when conventional volleyball was combined with a German game called Sitzbal.

Video coverage of the final

Here we leave the audiovisual piece for you to share, get excited and enjoy.

With information from El Sumario and Puro Vinotinto

Bitso activates payments with cryptocurrencies through QR in Argentina

United States and China could delay the application of new…