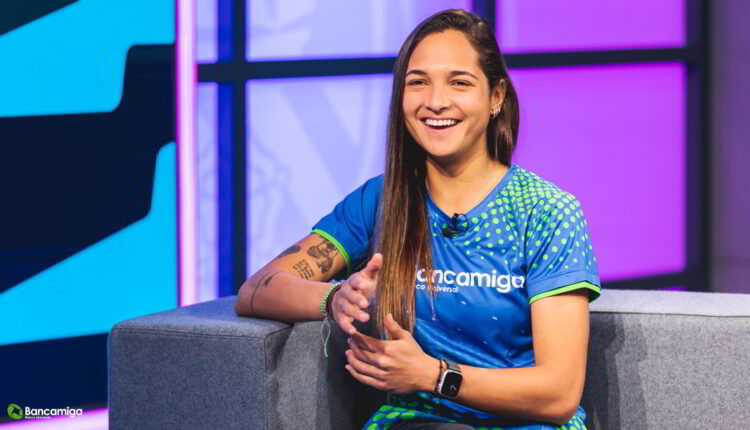 Deyna Castellanos: It is “very special” to be an ambassador for Bancamiga

The passionate player, whose image is closely related to Bancamiga, said that the female Vinotinto has very talented girls who will have this year, at the Pan American Games in Santiago de Chile, a stage to demonstrate their ability

For Bancamiga it is essential to strengthen its connection with Venezuelans, which it has been doing hand in hand with figures who, like the bank, represent professionalism, integrity and dedication. The leader of the female Vinotinto, Deyna Castellanos, is one of them.

At 23 years old, he has fulfilled the dream of many. He has played in two very important European leagues such as the Spanish and now the English, and in two clubs with great experience such as Atlético de Madrid and Manchester City, from England, with whom he signed a three-year contract.

“I am very passionate about what I do, and I like to improve day by day. I think that’s a very good thing, especially in a league like the English one, like the Premier, which is the most competitive in the world for both women and men. A match between the top of the table and the bottom of the table will always be difficult and hard fought. In the English League, football is very physical. I cover 10 to 11 kilometers per game, and that doesn’t happen in other leagues.”

Thanks to her innate talent for football, she is affectionately known as “Deyna La Reina”. Despite her youth, the captain of the women’s soccer team has been the youngest player to be nominated for The Best FIFA 2017 award and was part of the ideal team of the South American Soccer Confederation (Conmebol) in 2020. She also has two U-17 South American Championships and a record of 14 goals that make her the all-time goalscorer in these tournaments.

The young woman born in Maracay, Aragua state, said that she works to leave a mark in the clubs where she plays, so that when she is talked about it is “for being a great professional, a great player and mainly a great person.”

During the interview, she described being an ambassador for Bancamiga as “super special”, while adding that the female Vinotinto has very talented girls who will surely have a stage in the 2023 Pan American Games to demonstrate their ability.

And it is that because it is not a FIFA date, most likely the clubs will not give permission to their players to be in the Pan American Games, which will take place from October 20 in Santiago de Chile, which will undoubtedly offer them important possibilities of friction.

He expressed that to be in the starting eleven and in the elite of world soccer, the secret has been to respect hierarchies and open spaces along the way with a lot of effort, dedication and above all a lot of passion.

For the executive president of Bancamiga Banco Universal, Ariel José Martínez Coujil, having a reference in the institution like Deyna Castellanos is a way of motivating young people to practice a sport like soccer and of fostering among Venezuelans that need to cultivate their abilities and fight for their goals and dreams.

Crixto arrives in Venezuela as a payment alternative

Vodafone implements the use of 5G technology