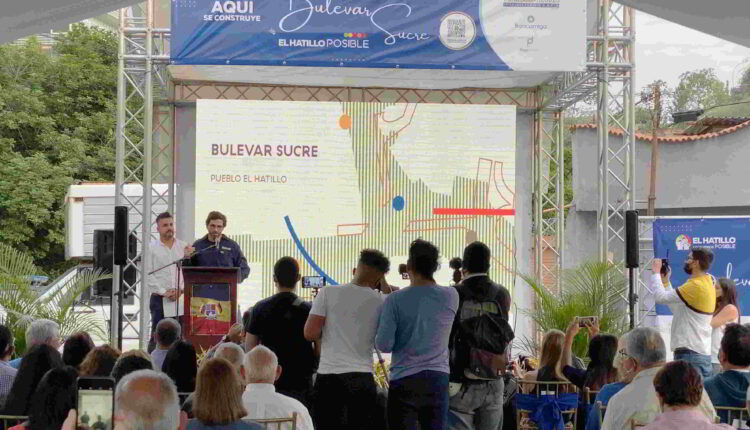 Bancamiga promotes the renovation of public spaces in El Hatillo

The Bulevar Sucre project seeks to promote the town of El Hatillo as a tourist destination, through the integration of its places and turning the parking lot of the Centro Comercial Paseo El Hatillo into a meeting point for the community and visitors

Bancamiga Banco Universal joins the purpose of beautifying public spaces, by participating in the Bulevar Sucre project, which the Mayor’s Office of El Hatillo is carrying out hand in hand with the Fondo de Valores Inmobiliarios and the private company.

The initiative seeks to promote the town and the municipality as a tourist destination. For this, the Centro Comercial Paseo El Hatillo will be integrated with Plaza Sucre and the town in general, improving urban planning based on Hatillans and visitors, which will undoubtedly promote the boom in commerce and the local economy. The architectural proposal combines more green areas, pedestrian routes and converts the parking lot of the shopping center into the main parking lot for Hatillans and visitors.

During the afternoon of this Monday, the mayor of El Hatillo, Elías Sayegh, and the CEO of the Fondo de Valores Inmobiliarios, Horacio Velutini, presented the project to the community, signed an agreement and gave the start of the work, in an event that was attended by the executive president of Bancamiga, Ariel José Martínez.

“El Hatillo will be a tourist jewel for all of Caracas. We are starting this project in public-private partnership to turn the place into a first world space. There will be more than 3,000 meters for the enjoyment of citizens, a space for coexistence and enjoyment. The Real Estate Securities Fund, Bancamiga, Pago Directo and the Mayor’s Office of El Hatillo have rowed in the same direction, with common goals. When this is done, capacities are enhanced and everything goes well”, said Sayegh.

For his part, Velutini pointed out that the project shows the union between the town, the municipality, the shopping center, the merchants or entrepreneurs and the parking lot, to integrate in such a way that people can enjoy themselves, especially because “in El Hatillo we have very cool alliances such as Pago Directo and Bancamiga, which bring with them technology, modernity and the new vibes that are coming and are being experienced in Venezuela.”