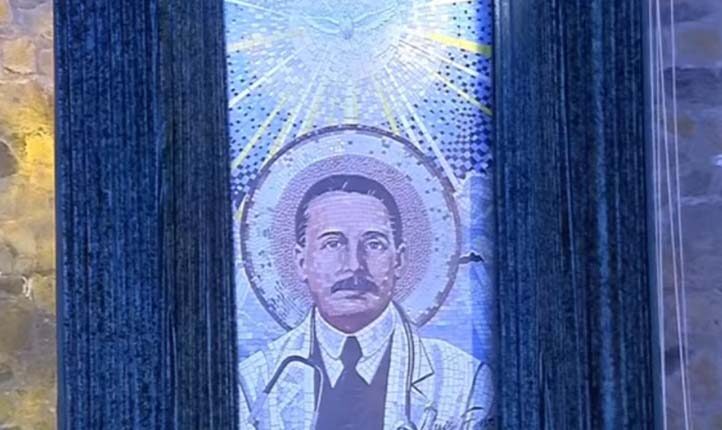 Venezuela celebrates beatification of the “doctor of the poorest”

The ceremony took place in the city of Caracas, presided over by the Apostolic Nuncio Aldo Giordano, accompanied by representatives of the Catholic Church in Venezuela

The beatification ceremony of the Venezuelan doctor José Gregorio Hernández, took place in the morning of this Friday, in the Church Juan Bautista de la Salle, Caracas.

Attendance at the beatification rite was limited to about 150 people due to biosecurity measures in the face of the Covid-19 pandemic. High representatives of the Catholic Church gathered in the religious venue to witness the act presided over by the Apostolic Nuncio of Venezuela, Aldo Giordano, accompanied by Cardinal Baltazar Porras, devotees, organizers.

Among the attendees was accompanied by her mother the young girl Yaxury Solórzano, recipient of the miracle of healing attributed to José Gregorio Hernández from which the cause of beatification began before the Vatican.

The new saint of Venezuela, José Gregorio Hernández Cisneros, was born in Isnotú, Trujillo state, on October 26, 1864. He was a doctor dedicated to healing the poor, of great religious devotion, as well as a scientist and teacher with extensive training within and outside your native country. He died in a car accident in the city of Caracas on June 29, 1919.

In 1949, the Catholic Church began the canonization process. His Holiness John Paul II recognized in 1986 the virtues of the doctor and declared him venerable. This process was renewed on January 18, 2019, after the miracle of salvation was attributed to the girl Yaxury Solórzano after being wounded by a gunshot. The process continued its course and, happily for the people of Venezuela and other countries, Pope Francis authorized the beatification of José Gregorio Hernández on June 13, 2020.

A new saint is declared

Once the session prior to the beatification concluded, with Cardinal Baltazar Porras, the proclamation of José Gregorio Hernández as Saint was read by the Apostolic Nuncio Aldo Giordano.

The attendees were able to appreciate the unveiling of the image of the new saint, with its corresponding halo, which is a copy of the pictorial work in his hometown, made by the plastic artist from Lara state, Luis Felipe Mogollón.

The liturgical act continued in the Church Juan Bautista de la Salle, in the city of Caracas, with the participation in the Eucharist of those present for the beatification ceremony of the so-called “doctor of the poors.”

The Schola Cantorum of Venezuela, as well as the Gran Mariscal de Ayacucho Symphony Orchestra – conducted by Elisa Vega –, were in charge of interpreting the different musical pieces, typical masses, for such an important ceremony.

Venezuela, and the world, has celebrated the elevation to the altars of José Gregorio Hernández, whose feast was established for October 26 of each year. The high representatives of the Catholic Church received the respective reliquaries for the multiplication of spirituality, devotion and love that the Venezuelan doctor showed throughout his life.

With information from national and international agencies, social networks and other media

Among Us is coming to Playstation

Huawei bills 13.1% year-on-year in the first six months of…

Binance to launch its own blockchain platform

West Virginia will use blockchain in upcoming elections