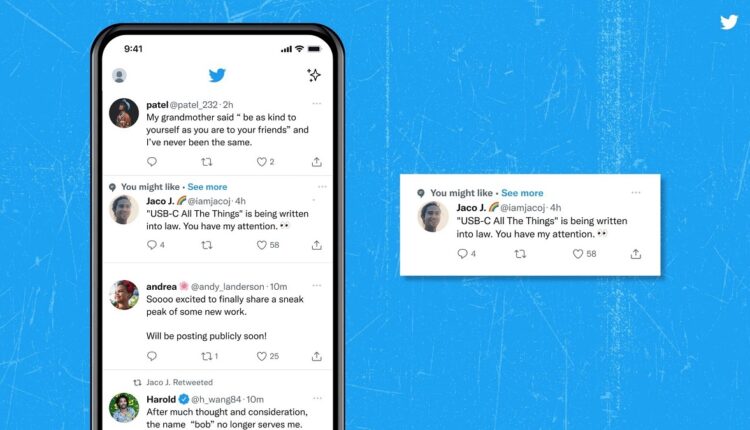 This Wednesday the platform announced that it will show all users more recommended tweets, as an initiative to show the best content on Twitter

The Twitter platform has announced that, from now on, it will show all users more recommended ‘tweets’ from accounts that they do not follow and that will appear in the main ‘feed’, since previously recommended tweets only reached some profiles.

The intent of showing more recommended tweets is to “ensure that everyone on Twitter sees the best content on the platform.” For this reason, it has expanded the appearance of these tweets to all users, “including those who may not have seen them in the past.”

Twitter recommendations appear in the home ‘feed’, along with the rest of the ‘tweets’ of the accounts that the user does follow, where they are organized algorithmically, but also in the Explore section.

Until now, most of the time there were ‘tweets’ from well-known accounts and the occasional ‘tweet’ recommending another account. With this new organization, more recommendations will also appear for users to whom they never appeared, as confirmed this Wednesday on the Twitter Support profile.

The appearance of the recommendations will not be something optional for the user. However, if you prefer not to see these ‘tweets’, you can change the main ‘feed’ to the ‘view of most recent tweets’. To do this, you have to click on the shiny stars icon that appears in the upper right corner of the main ‘feed’.

Once this mode has been switched, the ‘tweets’ of the accounts the user follows will appear in chronological order, from the most recent to the oldest.

Twitter began making recommendations so that users could discover interesting conversations and accounts. “They are personalized suggestions designed to enrich the experience on Twitter,” explained the social network. Likewise, it has indicated that the content that it recommends is based on the actions that the user performs in their profile, such as interests, topics that they follow, the ‘tweets’ with which they interact or those that are selected with a ‘Like’.

Recently, the social network has reached an all-time high in new registered users since the purchase of the platform, according to Musk himself, amounting to an average of more than 2 million new profiles registered per day since November 16. Daily subscriptions also increased by 66 percent compared to the same period in 2021.

Hispanic community will be decisive in the…