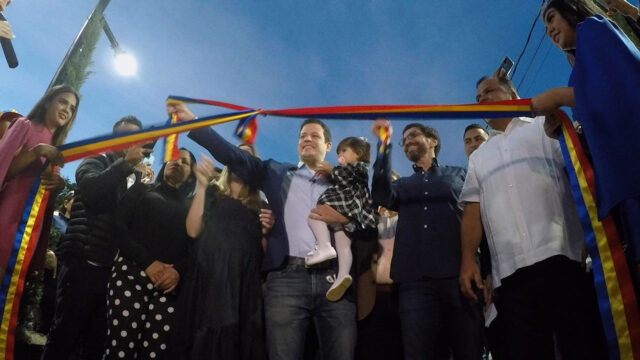 In a few months, the recovery of Plaza Sucre became a reality, as well as the inauguration of Bulevar Sucre in El Hatillo

These works of transformation of spaces, product of the joint effort of the Alcaldía y el Pueblo de El Hatillo in public-private alliance with the Fondo de Valores Inmobiliarios (FVI) and Paseo El Hatillo, benefit the inhabitants and visitors of the place, according to what was expressed by the neighbors and merchants themselves, who consider that they will bring progress, citizen well-being, economic and commercial development, as well as the strengthening of culture and traditions.

The mayor of El Hatillo, Elías Sayegh, led the act and opening ceremony, last Friday, October 07, highlighting that it is the materialization or realization of an aspiration of the citizens of El Hatillo based on healthy family recreation.

More than 4 thousand square meters are now the stage where visitors and neighbors have spaces and infrastructures, which will mark a milestone in cultural and tourist matters, and which will become the axis for the economic and social impulse of the municipality.

“The comprehensive development of El Hatillo is a priority, and that is why we focus on working to make each of the goals we set for ourselves possible. This grand opening, promoted by the Alcaldía de El Hatillo in a strategic agreement with the Centro Comercial Paseo El Hatillo and its commercial allies, represents a meeting point for the positive relationship of Venezuelans and consolidates the municipality as the tourist and cultural icon that it is. from Caracas,” said Sayegh.

Thanks to the sum of wills, this is an experience that is well worth making known and replicating

For his part, businessman Horacio Velutini, CEO of the Fondo de Valores Inmobiliarios (FVI), commented that “the inauguration of the Boulevard, a work that began last April, included the intervention of Plaza Sucre, Calle Comercio and the Bella Vista Street, to interconnect all the tourist systems of El Hatillo, through various cultural, recreational, religious and gastronomic areas. The construction was carried out respecting the indications made by the Conservation Board of the Historic-Cultural Heritage of El Hatillo.

The mayor stressed that “we are and continue to build the Possible Venezuela. We are proud to be part of this urban project that is already a reality.”

The Buffalo of Prosperity, his positive energy is contagious

In addition to this, Elías Sayegh stressed that the “Buffalo of Prosperity” is part of this great work and that prosperity is what we want for Venezuela. “The geometric sculpture, by the renowned Venezuelan sculptor Miguel Prypchan, symbolizes the desire to excel that all Venezuelans have. I invite you to touch him and take a photo with him, as his positive energy is contagious and that is exactly what we need.”

To conclude, the mayor affirmed that “the mirror of the Possible Venezuela has been one of the premises of his management and that, thanks to the design of public policies and public-private alliance schemes, different great works for development have been consolidated. of the municipality, the enjoyment and healthy recreation of both Hatillanos and visitors. I invite you to visit us, I invite you to invest, this municipality welcomes you with open arms.”

Here we leave you the audiovisual coverage of the event carried out jointly with El Sumario, which we invite you to listen and watch.