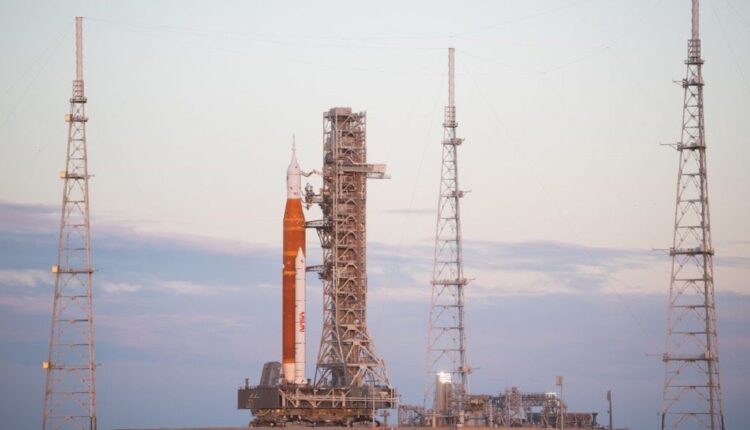 A hurricane forces another postponement of Artemis I

NASA has decided to change the launch target of the Artemis I mission from November 14 to 16, pending safe conditions due to the expected evolution of Tropical Storm Nicole.

This first liftoff of the agency’s new moon rocket, the SLS, along with the Orion crew capsule, has been delayed since late August by fueling leaks, which forced repairs, and by Hurricane Ian, which caused its withdrawal to the hangar for security reasons.

The SLS rocket is designed to withstand winds of 130 kilometers per hour. Current forecasts predict that the greatest hazards on the launch pad at Kennedy Center, Florida, are high winds that are not expected to exceed the SLS design. The rocket is designed to withstand heavy rain on the launch pad, and the spacecraft’s hatches have been secured to prevent water intrusion.

In preparation for the storm, crews shut down the Orion spacecraft, SLS core stage, interim cryogenic propulsion stage and boosters, the agency said in a statement. Engineers also installed a hard cover over the launch abort system window, retracted and secured the crew access arm on the mobile launcher, and configured settings for the environmental control system on the spacecraft and rocket elements. Crews are also securing nearby hardware and conducting walkthroughs for possible debris in the area, NASA reports.

A launch during a two-hour window opening at 06:04 UTC on November 16 would result in a return with splashdown on Friday, December 11. Through the Artemis missions, NASA will land the first woman and the first person of color on the Moon.

Twitter launches option to schedule messages from the web…

Antonio Díaz: “It is a great gift of life to compete in the…